Institutional knowledge is an awesome thing and something that is often taken for granted and/or overlooked. I recently learned a cool story surrounding one of the rare books housed in Special Collections, thanks to former Dean of W&M Libraries, Nancy Marshall.

During the War of 1812, Peter Wilson, the surgeon aboard the British ship Moselle, looted the medical textbook, An Inquiry into the Causes and Effects of the Variolæ Vaccinæ, a Disease Discovered in Some of the Western Counties of England, Particularly Gloucestershire, and Known by the Name of the Cow Pox, by Edward Jenner, M.D., from Denbigh Plantation in Newport News.

The significance of this book is that it focuses on vaccination, which at that time was a very new cure for smallpox. The volume was passed down through Wilson’s family, ultimately coming into the possession of his great-granddaughter, who lived in New Zealand. The book was acquired from her by a New Zealand physician. Historian, author, and friend to W&M Libraries, Spotswood H. Jones of Gloucester, spent two decades researching the history of the book and ultimately discovered its New Zealand location. 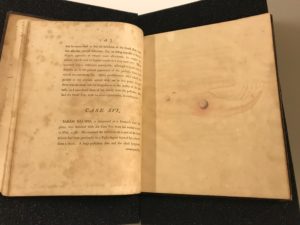 Upon learning that Library Dean Nancy Marshall would be traveling to New Zealand in October 1990, Jones, who named the volume “The Looted Book,” reached out to the owner and asked if he might be willing to return the book to its homeland, via Marshall. He agreed. Since its return to Virginia, the volume has resided in the Special Collections Research Center in Swem Library. 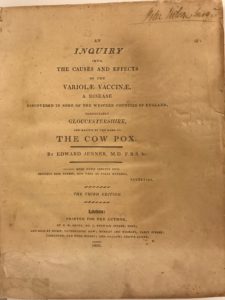