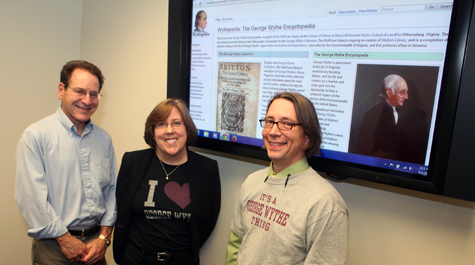 The College of William & Mary's Wolf Law Library has launched "Wythepedia," an online encyclopedia created to honor William & Mary's -- and the nation's -- first law professor, George Wythe. The launch coincides with Law Day (May 1) in the United States, a national observance that celebrates the U.S. legal system and the rule of law.

"Wythe has always been a somewhat forgotten Founding Father," said Linda K. Tesar, head of Technical Services and Special Collections, and the project's managing editor. "Wythepedia was designed to bring some much deserved recognition to a statesmen who was a revolutionary, jurist, and mentor to the likes of Thomas Jefferson, John Marshall, and Henry Clay."

Although many of Wythe's papers disappeared soon after his death, the librarians found that many of his letters, case reports, and other manuscripts in Wythe's handwriting survived, dating from the Continental Congress and the early days of Virginia's statehood.

In addition to the contributions by Tesar, Executive Editor and Library Director James S. Heller, and Wythepedia Systems Administrator Steve Blaiklock, many other librarians, staff, and graduate research fellows at the Law School contributed to the project.

One such student is Sarah Deuitch J.D. '16. Deuitch majored in classics as an undergraduate, and created entries describing many of the works in Latin and Greek that Wythe owned.  During the course of her work, Deuitch had the chance to pour over dozens of centuries-old books.

"It was a lot of work," she said, "but it was also fascinating to see that Wythe loved many of the same books that I do."