Beyond the History Books 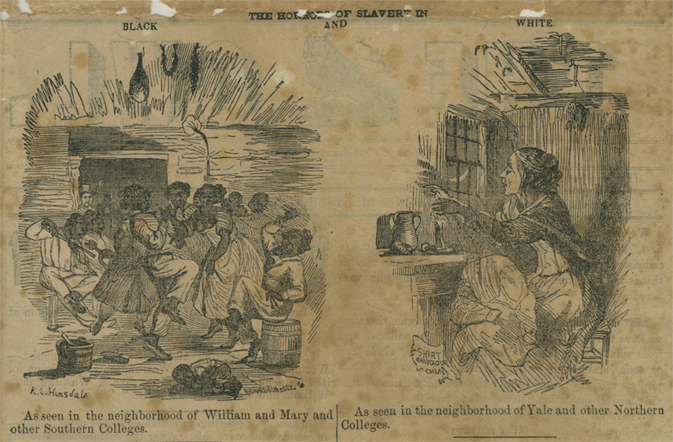 Slavery at William & Mary is a chapter that until recently had often been left out of written histories. From its founding in 1693 to the outbreak of the Civil War, the college owned, hired out, and rented slaves. In the early antebellum era, the college faced financial distress, the numbers of students and professors dwindled, and debates about a relocation to Richmond increased. The financial crisis affected the slaves as well, as the college was forced to transition from owning to hiring slaves as needed for specific tasks. In 1802, the college was forced to sell its off-campus Nottoway Quarter plantation, on which slaves cultivated tobacco to raise funds for scholarships for sons of white gentry.

Faced with financial turmoil and the resulting decrease of its enslaved population, professors and students responded with pro-slavery ideology. Professors such as Thomas Roderick Dew and Henry A. Washington argued that slavery was a benevolent institution serving a greater moral good. Many students argued that southern masters treated their slaves better than northern industrialist their factory workers. Professors’ and students’ paternalistic defenses of slavery in the antebellum period left an important impact on racial struggles at the College of William & Mary.

Stephanie Krauss curated this exhibit as part of a Spring 2014 independent study, which was directed by Professor Jody L. Allen, Managing Director of the Lemon Project.