Brave Enough to be First

When Janet Brown, Lynn Briley, and Karen Ely first moved into their freshmen dorms in Jefferson Hall at William & Mary, they were unaware of the significance of their presence. The three women were the first African Americans in residence at the university, a fact unbeknownst to them until they were interviewed for the Flat Hat newspaper in October of their freshmen year. Prior to their arrival, African American students were rare and the few that were accepted were not allowed to live amongst their peers on campus. Fifty years have passed since these scholars began their studies in 1967. Since then, black students and faculty have built upon the legacy of these three women and those who came before them, creating spaces where members of the black community at William & Mary are able to thrive, succeed and support one another. William & Mary’s relationship with black students, faculty and staff has been anything but smooth. Brave Enough to be First serves to honor this legacy, to shed light on just how far we have come, and to inspire continued diversity and inclusion. 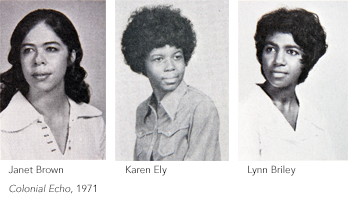 For more information about William & Mary's yearlong commemoration of the 50th Anniversary of African Americans in Residence, visit http://www.wm.edu/sites/50/.