The Menokin Project: Re-imagining a Ruin

Through Their Eyes: A Photographic Journey
Location:
Botetourt Gallery
Duration:
May 21, 2015 to October 6, 2015 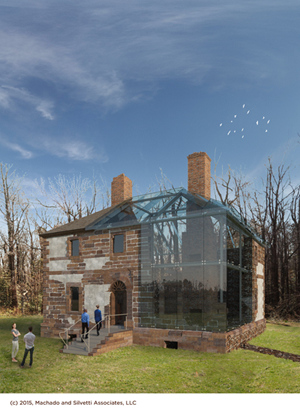 Built as the home of Declaration of Independence signer, Francis Lightfoot Lee, Menokin is now the evocative remains of an historic mansion surrounded by a vast, cultural landscape. The Menokin Foundation was established in 1995 to protect and breathe new life into Menokin, and immediately began work to not only reverse the deterioration of the house, but also chart a course for its future.
In casting this vision, the Foundation has always desired to do something innovative. Eighteen years of painstaking research, planning, conserving and gathering the pieces of the “Menokin jigsaw puzzle” have paved the way for an exceptional future. Menokin is in Warsaw, Virginia, in the rural region known as the Northern Neck. This region is the birthplace of three early presidents (Washington, Madison, and Monroe) as well as two Signers, Francis Lightfoot Lee and his brother, Richard Henry Lee. The plantation and house were established in 1769 on land once inhabited by the Rappahannock Tribe, who gave the site its name.
Now the Menokin Foundation is embarking on a revolutionary re-imagining of this historic structure. Led by the architecture firm of Machado and Silvetti Associates, The Menokin Foundation hopes to transform this house and 500-acre classroom into an educational and environmental experience like no other. You are invited to step inside this unfolding story and glimpse the impact that this mysterious place has had on two photographers and one architect with an eye for the exceptional.
Discover more about the exhibit through the Menokin Foundation's online publication, Through Their Eyes: A Photographic Journey.
Visit the Menokin Foundation's blog, Rubble with a Cause: A Revolutionary Exploration of Historic Preservation, and facebook page to find out more information about the project and how you can get involved.