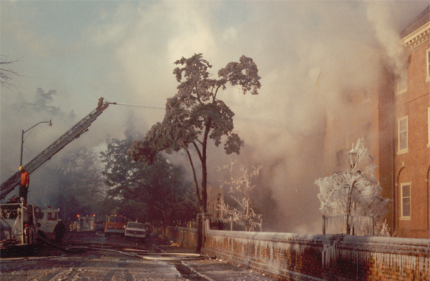 At approximately 1:10 a.m. on the morning of January 20, 1983, an alarm was pulled to signal a fire in the Jefferson Hall dormitory. All 183 students, mostly freshmen, were forced to evacuate the building. Fortunately, no one was seriously injured. The cause of the fire was traced to a malfunctioning electrical kitchen appliance. The fire spread very quickly because the dormitory lacked necessary fire stops inside its walls. As a result, most of the west wing was completely destroyed, and the fire was estimated to have caused approximately $5 million in building damages.

A video produced by William & Mary Television Services featuring news coverage of the Jefferson Hall fire was uploaded to Youtube by Swem Library.

Images of the exhibit are available from Special Collections on Flickr.