A glimpse into the world and artistry of the Richmond-born, black photographer
Location:
Swem Library Lobby
Duration:
February 17, 2015 to May 17, 2015 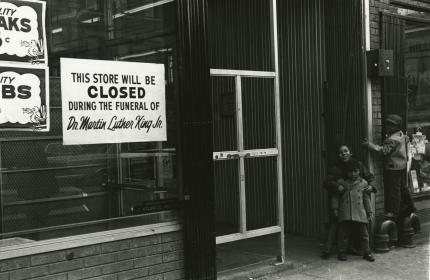 Louis H. (Lou) Draper (1935-2002) attended Virginia State College in Petersburg (now Virginia State University) in the 1950s, where he discovered his passion for photography. He remembers coming across a catalog for the MOMA 1955 photography exhibit The Family of Man: “The faces in that book were so powerful. I picked it up and couldn’t put it down.” Lou travelled north to Trenton, New Jersey to pursue photography by enrolling at Thomas Edison College. His father, a photo enthusiast himself, gave Lou his first camera partly prompting him to join the camera club.

Although Lou had been taking photographs for his college newspaper, it was only then that he decided to go to New York City to become a professional photographer. He earned a Master of Fine Arts degree from NYU’s Institute of Film and Television.

Draper’s career took him around the world. He met and photographed historical figures and international celebrities, including Malcolm X, Langston Hughes, Jacqueline Kennedy, Fannie Lou Hamer, and Miles Davis. He also co-founded the Kamoinge Workshop, a group of black photographers who presented exhibitions with the purpose of depicting the lives of blacks.

Draper has worked for publications like Essence, Camera Magazine, and Black Photographers Annual, and his photographs have been exhibited in permanent collections, including the Schomburg Center for Research in Black Studies at the New York Public Library. Draper also headed the photography department at Mercer County Community College in New Jersey from 1982 to 2002.

Louis H. Draper died in February 2002 in New Jersey. Surviving him is his sister Nell Draper Winston, who lives in Richmond, Virginia and works to keep the dreams and memories of her beloved brother alive through his illustrious works.