William & Mary will soon be home of one of history’s most famous trees. Well, at least a very close relative. This Saturday, February 22, the College of William & Mary will accept the first of three apple trees grafted from a descendant of the purported apple tree that inspired Isaac Newton’s theory of gravitation. The gift comes to us from the Massachusetts Institute of Technology, which is connected to William & Mary is through its founder and W&M alumnus, William Barton Rogers.

Newton holds a special place for us here in Special Collections, as we have our very own 1st edition copy of Newton’s Philosophiae Naturalis Principia Mathematica, otherwise known simply as the Principia.

The work, originally published in 1687, is regarded as one of the most important scientific texts of all time, and according to W&M Physics professor, Josh Erlich, “...remain[s] at the center of gravity of much of contemporary physics research.” Elrich continues:

“As a modern-day scientist, I find it difficult to imagine that a work as comprehensive, novel, and influential as Newton’s Principia will ever again be written.  It would take a work the size of the Principia to describe all of the important ideas developed in the Principia.  All students of physics study the subject of classical mechanics, most of which is a presentation of Newton’s ideas as developed in his great tome.”

As if being a 1st edition of such a seminal work were not enough, what makes Swem’s copy unique is that it also contains a great deal of notes by an early reader written in the margins (and sometimes overtop of) the original text. During the late 17th century, this practice was particularly common. According to W&M History Professor, Nick Popper, at that time printed texts and manuscripts “...both crystallized an experiment or theory and prompted action from its reader.” Popper says: “Scientific writings stimulated evaluation and practice rather than uncritical response.” 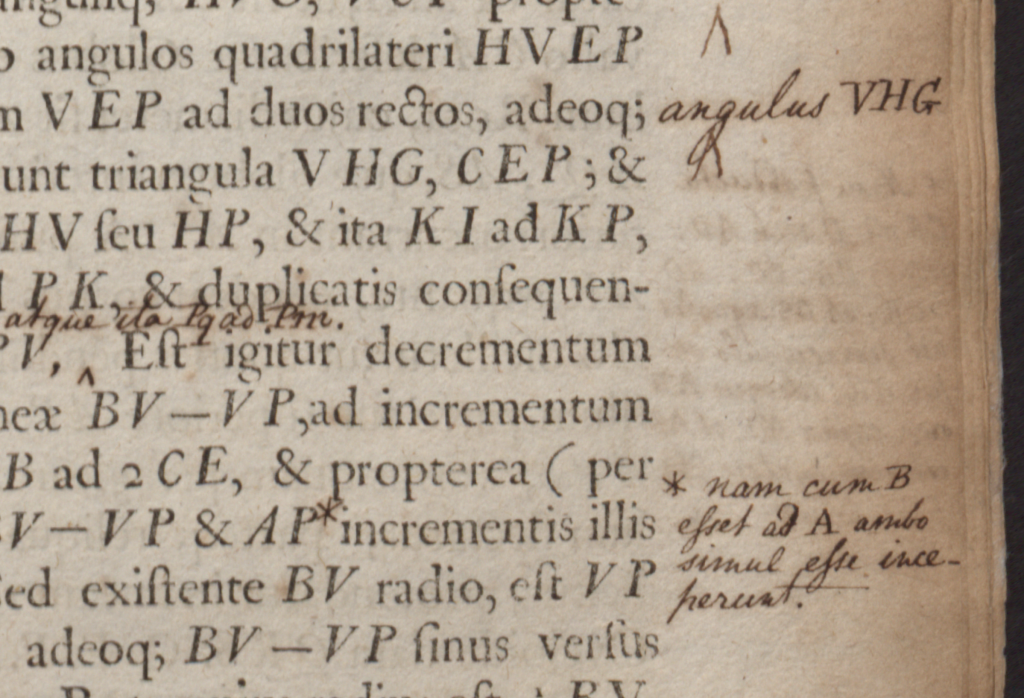 The readers’ notes (there were possibly two separate sources) of Swem Special Collections’ Principia therefore not only give us greater insight into the mind of Newton, but also help us better understand the greater scientific community of Newton’s time as it reacted to his monumental new ideas.

Unfortunately, although some details of the annotations have been revealed with the help of W&M scholars such as Professors Erlich and Popper, many details about the notes, including the identities their author(s), remain a mystery.  To commemorate the Newton Day tree planting event and to hopefully shed light on these mysteries, Special Collections has partnered with Annotated Books Online to digitize our copy of the Principia and open it up for researchers worldwide to decipher. Annotated Books Online is a digital library project founded at the University Ultrecht in the Netherlands that gathers digitized versions of annotated early modern texts from across the globe and offers the tools to translate, describe, and explain those annotations online. 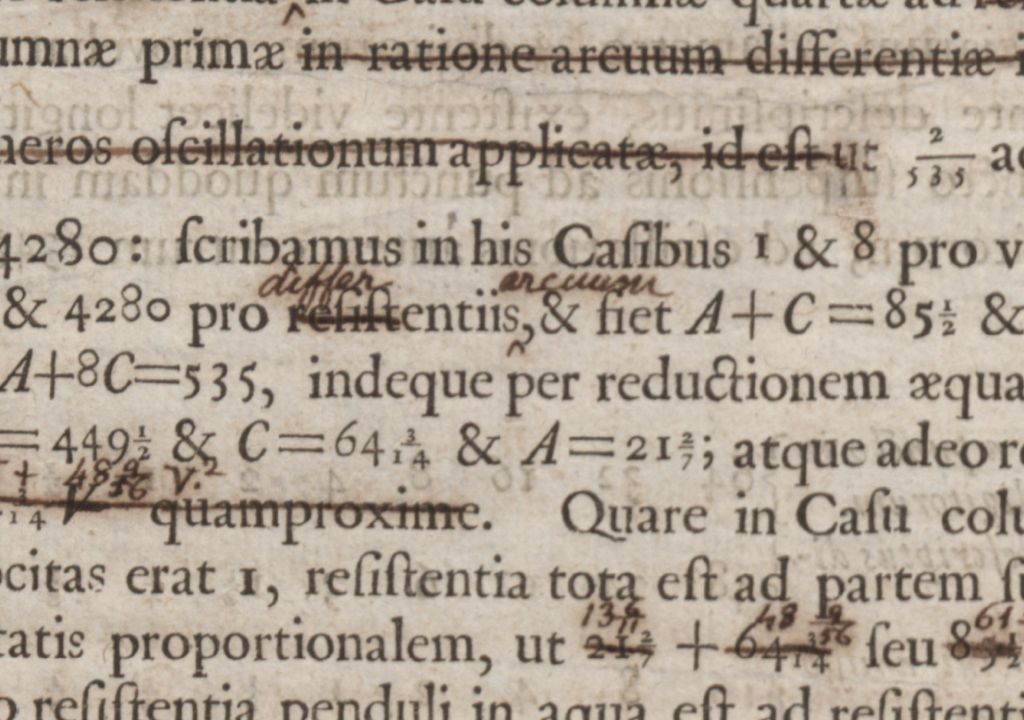 In addition to learning more about our own annotations, one unique aspect of this partnership stems from the fact that there is already another copy of the Principia annotated by the late-17th/early-18th century Dutch scholar Adriaen Verweramong among the many books in the Annotated Books Online collection. Not only do we have a chance to learn more about our Principia notetakers, we will have the have the opportunity to compare how different readers understood and made sense of the same text. Professor Popper explains the importance of investigating these comparisons:

“The page, whether paper sheet or digital screen, can be seen as its own distinct laboratory – a controlled space for scientific inquiry in which word, images and number serve as its instruments. Historians of early modern science have led this charge by demonstrating that the experimental and theoretical movements associated with the scientific revolution relied on the circulation of writings among natural philosophers.”

“The thriving state of Europe’s scientific community in the late seventeenth century, during Isaac Newton’s lifetime, rested upon this circulation of scientific writings.”

Special Collections Research Center, with the help from Annotated Books Online, invites you to help continue this tradition of scholarly circulation. To check out the transcription process for yourself, or to add your own interpretations of the margin notes, check out our digital copy of thePrincipia on Annotated Books Online. If your Latin is a little rusty but you are still interested in learning more about the Principia, be sure to head to the W&M Digital Archive and read the excellent work of William & Mary alum David Lewis, Newton's Principia: Biography of a Book. And finally, if you are looking to derive your own world-altering insights while gazing upon an apple tree, head to the Newton Day tree planting event this Saturday. Although, fair warning, the tree will not yet be at its full majesty for at least another three years. But what better way to appreciate the full bloom of a tree, or an idea, than to watch it grow from its humble beginnings?