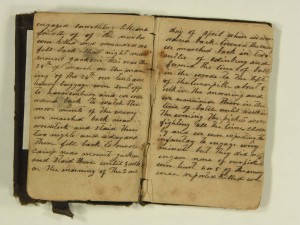 The Special Collections Research Center at Swem Library has begun a transcription initiative as part of the "From Fights to Rights: The Long Road to a More Perfect Union" project. The transcription work is a massive effort by volunteers to transcribe selected documents such as diaries and letters and make them available online. One of the first documents selected for transcription is the diary of Asa John Wyatt. Wyatt was a Confederate officer in Company I of the 21st regiment of the Virginia Infantry under the command of Stonewall Jackson. His diary includes accounts of his participation in Jackson's Shenandoah Valley Campaign in the spring of 1862.

Wyatt's diary begins with his regiment's movements in June and July, 1861. They see no fighting, but hear the canon from the distant First Battle of Manassas (also known as the First Battle of Bull Run). Wyatt's diary is a harsh reminder of the monotonous life of a soldier. Most of Wyatt's diary documents movements of the regiment from one place to another for miles upon miles each day. Cold, hunger, and sickness were his main concerns. He, in fact, looked forward to the prospect of battle to break up monotony, evidenced by his description of the "high spirits" and quicker movement his regiment experiences when called as reinforcements for fighting at Valley Mountain, Virginia (now in West Virginia), which he was disappointed to find was a "false alarm."

In August, Wyatt developed typhoid fever and in his weak state endured being tossed about in a wagon over a thirty-mile journey over "one of the roughest roads" he had ever encountered. His sickness develops into jaundice. His recovery takes four months, and by spring 1862, he rejoins the regiment and participates in what would go down in history as Jackson's Valley Campaign. Wyatt's regiment fought in the Battle of Front Royal and the First Battle of Winchester on May 23 and 25, 1862. At Winchester, Wyatt "was struck in the breast by a piece of bomb shell but not much hurt." Wyatt's regiment experienced heavy losses, but it was a major victory for the Confederate Army, diverting the Union Army from converging on Richmond. Wyatt credits Turner Ashby's cavalry command for effectively screening their movements. Wyatt reported that the cavalry followed the Union Army to Harpers Ferry, Virginia and specifically captured many black soldiers. Wyatt estimated that in three days of fighting, the Confederate Army had killed and captured 4,000 Union soldiers.

After a brief stop at home, the specifics of which Wyatt writes nothing, Wyatt joins his regiment in Richmond and then Gordonsville, Virginia, where he was placed as part of Robert E. Lee's defense of increased Union presence in northern Virginia. This is where Wyatt's diary ends, and we know that he was killed in the ensuing Battle of Cedar Mountain.

Lisa Sparks Carpenter is a graduate student in the American Studies program and the 2010-2011 Archives Intern in the Special Collections Research Center, Swem Library.