This past spring Sharon Summers, Charles W. Scandrett, Janet S. Hunt, Barbara J. Kaufman, and Sandra S. Ellender generously donated the Civil War diary of Henry Alexander Scandrett to the Special Collections Research Center. Scandrett fought for the Union during the war and recorded his experiences in the pocket diary. His diary begins on May 5, 1862 with a significant announcement:

Was in my first battle today. About 1 Oclock P.M. our regiment was marched into the field about. We were thrown in advance and through some blunder was not reinforced. We have lost all our company officers and our field officers are all wounded. With fifteen others I was taken prisoner and am now in William & Mary college.

Other daily entries document camp life, weather, rations, and events, including serving as a pallbearer for the funeral of one young soldier who died from typhoid fever. Scandrett documents several close encounters with “the enemy,” in one instance writing that “The rebels were firing all night, killing 1 man and wounding three, one mortally.”

Scandrett’s diary is a valuable primary source that reveals fragments of the College’s past, as well as events from the nation’s history. It is one of many artifacts among the Special Collections Research Center’s vast collections that are regularly used by faculty, students, and researchers globally to piece together important historical narratives. 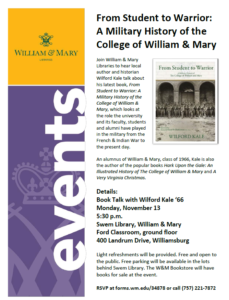 Author and historian Wilford Kale (class of ‘66) was instrumental in coordinating the donation of the Scandrett diary. Kale recently published his latest book, From Student to Warrior: A Military History of The College of William and Mary, which features many items from Special Collections. Join us for his book talk today, Monday, November 13 at 5:30pm in the Ford Classroom in Swem Library, when he will discuss the role the university and its faculty, students, and alumni have played in the military from the French and Indian War to the present day.