As a child of the 90's, I'm pretty familiar with trading cards. Pokémon and Yugio cards were all the rage throughout my younger years, but little did I know that trading cards have a much richer history than keeping myself occupied throughout elementary school.

Before there were trading cards, there were cigarette cards. Slipped inside your packet of tobacco or, eventually, your box of rolled cigarettes, these cards were a marketing ploy that depicted everything from scantily clad women to popular baseball players from the time. You would collect the various different gals or guys and eventually have a small collection of your own. In time, the cigarette card would give way to the baseball card.

While processing a collection, I happened upon a few 1930s cigarette cards. Packaged with Golden Grain granulated tobacco from Brown & Williamson Tobacco, these cards featured stars and starlets from the Golden Age of Hollywood.

Among these stars was Jane Wyatt, who is known for playing the matriarch in the TV show Father Knows Best, and Lyle Talbot. Talbot, whose actual last name was Hollywood, had a role in the Ed Wood film, Glen or Glenda. 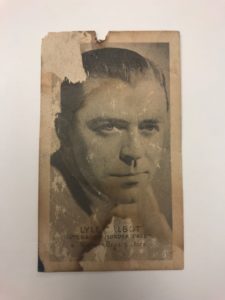 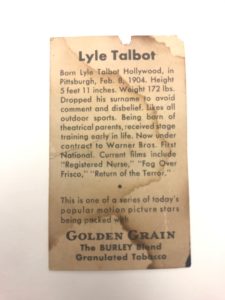 What really stood out to me was the card for Jean Muir. Muir's card promotes her upcoming role in the 1934 film Dr. Monica. Though she may look like your typical "Old Hollywood" starlet, Muir is better known today for being the first actor blacklisted during the era of paranoia and anti-Communist sentiment known as the Red Scare. Muir's name was published in an anti-Communist pamphlet in 1950, in which she was described as a Communist sympathizer. She was fired from her TV show gig and only starred in a few TV movies throughout the remainder of her career.

Sometimes work in Special Collections can be anything but glamorous. Processing collections often means getting a little dust in your eyes and the occasional paper cut. Other tim, however, you find unexpected treasures that reveal an even more unexpected narrative. For someone like me who loves Old Hollywood as much as I love the archives, these cards were that treasure.