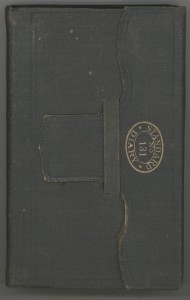 George Fetterman, a western New York farmer, did something remarkable. He wrote a diary entry every day. Every day--for sixty years.

1890-1950, the period Fetterman's diaries cover, saw the rise of corporations and industry, the women's suffrage movement, a Great Depression, and two World Wars. But to read his diary, you would hardly know it. Fetterman, like many people, was an individual wrapped up in making a living for himself and his family. Certainly he was affected one way or another by changes in his nation and world, but throughout his life he remains rooted in his life on his farm and in his local community. His life exemplifies an agrarian lifestyle that would become increasingly rare after 1950.

Fetterman started out as a laborer in Clarkson, New York, working for local farmers. He later moved to Pendleton, New York, where he had a farm with his wife Eliza Prosser and daughter Dorothy. Fetterman purchased his pocket-sized diaries annually with pre-printed dates. This was not a space to record lengthy feelings or musings. Fetterman's diary entries are simple and brief, describing events of the day, chiefly work accomplished. Some of his main farming duties included working in fruit orchards, growing wheat and corn, and milking cows.  Throughout his life, his farm remains a small operation that provides food and modest income for his family. He was always engaged with the community, and local farmers often helped one another during labor-intensive parts of the agricultural calendar. He records frequent visits to and from neighbors and small favors they exchanged, such as driving one another to the train depot in Lockport. Going to Lockport to sell his farm goods and conduct shopping was also a welcome break from physical labor.

Fetterman's forms of recreation changed significantly throughout this sixty year period. In the earlier diaries, his main form of recreation was attending church, prayer meeting, and “sings” several times a week, as well as reading books in the evening. In later years, he tended to listen to the radio for evening entertainment. Neighbors visited one another frequently to sit and chat, although less so after he married and started a family. 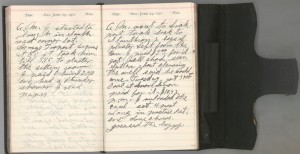 Almost every day, Fetterman recorded the weather. As a farmer, the weather determined the type of work he did, how much he was able to accomplish, and the success of his crops.  Rather than viewing his record-keeping as mundane, we can think of the remarkable longevity of his diary-keeping as a way of giving permanence to his day-to-day toil. He made record of all the work that would have been long-forgotten, and in that sense, these diaries serve as a legacy of his life.

Lisa Sparks Carpenter is a graduate student in the American Studies program and the 2010-2011 Archives Intern in the Special Collections Research Center, Swem Library.