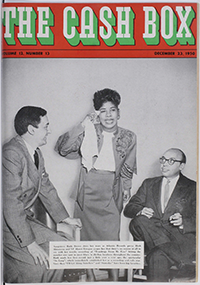 Swem Library has received a $60,000 grant from the Council on Library and Information Resources (CLIR) to digitize its entire run of Cash Box, a music trade magazine published from 1942 to 1996.

“We are overjoyed to be able to unleash decades of music industry information to the public,” said Dean of University Libraries Carrie Cooper. “Swem Library has been gearing up for a greater emphasis on the digitization of unique and rare collections that are of interest to the public and scholars. We are grateful to have partners like CLIR to support our efforts to expose the hidden treasures of our library.”

The grant is part of CLIR’s Digitizing Hidden Special Collections and Archives awards program, a national competition that funds the digitization of rare and unique content held by libraries and institutions that would otherwise be unavailable to the public. The program is funded by the Andrew W. Mellon Foundation. Swem Library was one of 18 awardees selected from 165 applications.

“We are very excited to make this important and internationally significant resource for the study of music history and popular culture more widely accessible,” said Jay Gaidmore, director of the library’s Special Collections Research Center. “Since acquiring these issues in 2010, we have received more requests for copies and information from Cash Box than from any other individual collection held in Special Collections.”

Filling requests for copies of Cash Box materials has been difficult, Gaidmore said, due to the library’s lack of resources. Researchers who need immediate access to the collection typically must travel to Williamsburg. Making the collection available online will put this resource into the hands of researchers across the globe.

Philip Gentry, assistant professor of music history at the University of Delaware, is one of those researchers. As a scholar and teacher of American music in the post-war era, Gentry believes Cash Box provides a crucial alternative to Billboard, which primarily focused on mainstream music. 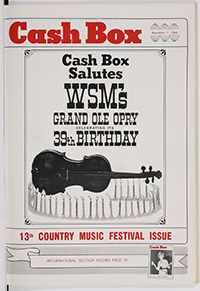 “[Cash Box’s] formula relied more heavily upon jukebox ‘plays,’ and thus are often a much more reliable window into trends of more subcultural markets such as African American-dominated rhythm and blues or white working-class country,” he said.

Gentry is currently working on a project documenting anti-communist blacklisting in popular music during the McCarthy era. He has found very little discussion on the topic in Billboard, but has seen hints that it was more openly discussed in Cash Box.

Not only is Gentry excited to see Cash Box digitized for his own scholarship, he sees impact on his teaching as well.

“Digitization makes possible a whole world of classroom assignments,” he said. “Unlike with older primary sources, very few institutions have undertaken the commitment to properly archive and make accessible collections of the recent past. And yet, teaching research skills and the tools of critical reading is no less important for students engaging with popular culture of the American twentieth century.”

Swem Library is partnering with the Internet Archive, which provides free public access to collections of digitized materials, to scan all 190,000 pages of the 163-volume collection and create an online portal for reading and downloading the digital images. The project will begin in February and is expected to be completed by December 2016. The collection will be made freely and publicly available through the Swem Library website and the Internet Archive.